Irtiza Rubab, who is better known as Meera is admitted to Mental Hospital in New York during her United States (US) trip. Meera is a well-known Pakistani actress. Her husband’s name is Captain Naveed Pervaiz. She went to the doctor because she was not feeling well as she had a fever. She misbehaved with the American Doctor and exchanged heated words with the doctor, and because of that, the doctor called the mental health center and forced her to go with them.

Her mother Shafqat Rubab confirmed that the news about Meera being in Mental Hospital is true, but she also said that her daughter is not mentally ill. On April 5, Meera called her mother, she was crying. She told her mother that she is in Mental Hospital and also told that the US Police is sending her to a psychiatric facility for two days. Meera’s Mom also added that Meera continuously told the Police that she is not mentally ill, she is an actress. Meera’s mother said that she is unaware of the reason. The doctors said that they will not release Meera until they confirm that Meera is not mentally unwell. Meera’s mother asked for help from the Pakistani government to bring Meera back to Pakistan safely.

Muhammad Qasim, the manager of Meera, said that she is mentally and physically well and she is safe at home in the US. He also said that her mother is just spreading the rumors because of their personal disputes. Another close family member said that Meera went to a mental health center just for the regular checkup and her mother was well aware of it which is why her mother is painting a different picture, but in fact, Meera is in touch with her father and sister. It has been confirmed from the officials today on 8th April that Meera has been released from Mental hospital. Meera’s husband gave a guarantee of five thousand pounds to the US doctors. US Doctors advised Meera to go to Pakistan and get her treatment. They also ordered Meera to leave New York within two days. Imran Abbas Naqvi who is an actor, model, and singer in Pakistan defended Meera and talked about this issue in a Facebook post: 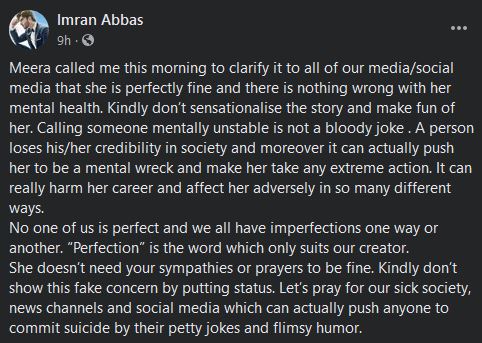