Haya was in a precarious state and doctors were trying their best to make her condition stable and regain her consciousness. She was numb and everyone was worried about her. Her parents were praying to Allah for several hours but she was not getting better at all. Although it was 12 in the noon, there was darkness, a darkness that enveloped the heart of her loved ones.

Faiza and Ahmad (Haya’s parents) were in shock to see their daughter in such a critical condition because she was so full of life; she never got disappointed in her life and the glow of life always shone in her eyes. She had tried to commit suicide which was horrible and unexpected for her parents. Nobody knew why she did that except Zoya.

Zoya and Haya were best friends; the kind of childhood friends that know everything about each other. Their bond was so strong that nobody dared to separate them. Haya used to share everything with Zoya and the same was the case with Zoya. They were one soul with two bodies in the true sense.

Haya was the only daughter of her parents that’s why she was a spoiled child. She was beautiful, generous and sensitive. She was brought up in such a loveable environment that she was completely unaware of the complexities and tribulations of life. She was the perfect daughter anyone can wish for. She was everything good but mature. She couldn’t do anything on her own.  Zoya, on the other hand, was a sensible girl and was well equipped to face ever-changing circumstances.

Haya and Zoya were studied in the same school. Everything was going perfect and Haya was fully satisfied with her life until the change happened which affected her tremendously. It was after matriculation. Haya got lesser marks than Zoya but she was very happy for Zoya and she congratulated her on her great success. After that, both of them got admission to the same college but their sections were changed because of the marks’ difference. Haya was expecting the same behaviour from Zoya but Zoya was unable to do that because she had to cope up with her class to fulfil her dream of becoming a doctor.

Zoya was practical while Haya was emotional. Zoya was trying to behave the same way but Haya started comparing Zoya with her past actions. The best and worst thing about time is that it changes; changes people with it without them even knowing. This childish behaviour of Haya started annoying Zoya. Their friendship started to fade away just because of Haya’s overthinking. Haya was so immature that she didn’t want to accept reality. She couldn’t bear any change and this was her tragic flaw. Everything changes over time because of the changed circumstances; it is the reality of life, a bitter pill we all have to swallow.

One must have the ability to accept the change because life itself is progressing and changing constantly; life is metamorphosis but Zoya wasn’t aware of that. Because of this, she suffered a lot in her life.

She became a victim of the inferiority complex and she lost her self-esteem. She became prejudiced about herself that she can’t do anything and that she can’t cope with society. Just in the blink of an eye, she ruined her life just because of her overthinking. In FSC, she didn’t score well. Her parents were not expecting this from her. She was affirmative that she can never be the reason for anyone’s happiness and she started taking herself for granted. She used to think that a life that can’t bring happiness in someone’s life is useless. Nobody was aware of her thoughts but she wanted to share this with someone so that she could unburden herself.

Even though in hard times, Zoya was her last resort. She called Zoya and explained everything to her. Zoya listened to her and advised her not to overthink and try to keep herself calm but she wasn’t able to give her much time because of her first medical professional exams. The idea of Haya committing suicide never crossed Zoya’s mind. So, she didn’t pay much attention to that.

Zoya was having flashbacks of her conversation with Haya when she came to know about Haya’s condition. She felt guilty and went straight to the hospital and explained the whole scenario to her parents and her acquaintance. Her parents burst into tears. They were also feeling guilty that they were never able to understand their daughter and that they never taught her the real meaning of life. Raising a child with love is one thing while walling them off from reality is other. Haya’s parents had a blurred line between these two. They continued praying to Allah for Haya’s survival.

It was midnight and still, she wasn’t conscious. They were waiting for the doctors’ response. The doctor came up with good news that she had regained her consciousness and she will be perfectly fine in a few days. Her parents came to her and hugged her, with love, passion and guilt. Zoya was also there and all of them stayed with her until the doctors discharged her. Her parents thanked Allah and went home. After regaining her senses, Haya was on her bed, thinking that there is no escape from reality and her failed attempt to escape from the reality was the living evidence of this. Haya has realized this the hard way and she started her life with new hope.

“Life is nothing but a constant change; time changes; seasons change; circumstances change; everything is in a state of constant change. Happy is the one who can survive the change” 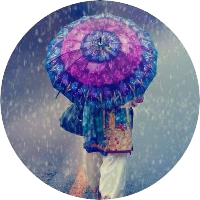 Good or bad, time is always gonna change, thats the reality of life. Enjoy the good moments you get and try not to make bad decisions in bad situations.
() () (394 days, 3 hours, 27 minutes ago)