Is Apple deciding to build an Apple Electric Car? - Post4Everyone

Is Apple deciding to build an Apple Electric Car?

Apple Inc. is a company of American Multinational Technology. Ronald Wayne, Steve Wozniak, and Steve Jobs are the founders of Apple Inc. It comes in the top five companies of the United States (U.S.). The headquarters of Apple is located in California, United States, and Cupertino. It has many hardware products. The Apple hardware products are Apple Watches, Apple TVs, Apple iPads (Tablet Computer), Apple iPhones, Apple MacBook, Apple Home Pods, and Apple iMacs.

Now Apple is planning to build an Apple Electric Car. Apple has planned to invest $3.6 Billion for the production of its Electric Car in Kia Motors. This deal is revealed in the report provided by DongA Ilbo, a Korean outlet, via Bloomberg. In this report, the complete details of the details are mentioned. It is mentioned in the report that the deal will possibly be signed on 17 February 2021 by both Apple and Kia Motors. According to their plan, the Apple Car will be launched in 2024 in Georgia, U.S., at the automaker’s facility.

Both Kia Motors and Apple also discussed the initial target of the Production and Development of Car. They have set their target of producing 100,000 Cars in each year which will later be expanded more and more and then will produce 400,000 units per year. Apple decided to use its funds for manufacturing this Electric Car and decided to use Exclusive facilities in its development and production. 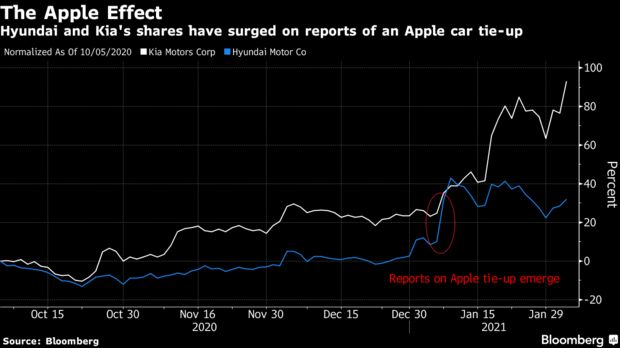 A January report told that Apple discussed with the associates of the Kia Motors, Hyundai, concerning the Apple Automotive Production and the Hyundai had gladly confirmed this news. That report also told that Apple and Hyundai are still having discussions and second thoughts on its production and the discussions are at "their early stages" and said that "nothing has been confirmed yet". But later on, Hyundai changed their statement by saying “We are confirming that we are talking to the partners for manufacturing the Apple Car”.

As far as the features and specifications of the car are concerned, the analyst of Apple, Ming-Chi Kuo, has disclosed some of its specs. According to him, the full charge range of the Apple Electric Car will be 300 miles and on the charge of 5 minutes, its range will be 60 miles. He also disclosed the speed of the car. The car will have a higher speed than usual.  He said that the top speed of the car will be 60 mph, and in less than 3.5 seconds, this car will be able to cover the distance from 0 to 60 mph. The specifications he told are for the High-Performance Model of the Car which means that they also decided to produce a regular and cheaper model of the Apple Electric Car at least one.

One thing that Ming-Chi Kuo said contradicts today’s new Korean report and that is about its launch date. Kuo said that the car will be launched at the start of 2025 but today’s report told that its launch is decided in 2024.

Now let’s see when it will be launched and what specifications and features will it have.