After more than 6 years of Development and a long flight to MARS, NASA has successfully launched and landed their Helicopter, called Ingenuity, on MARS. This helicopter used Atmospheric lift for flying on MARS because the atmosphere on MARS is one percent the density of the Atmosphere on Earth. NASA landed their Ingenuity drone on MARS on 19 April 2021. It was their first controlled and powered drone that they have landed on another planet. 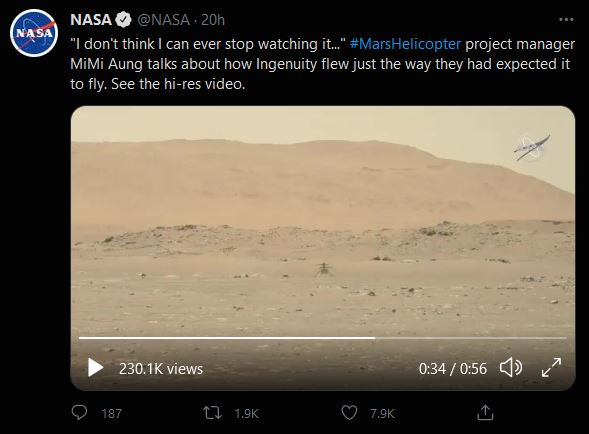 They faced many impossible odds to make this flight successful. They performed many tests on their Helicopter before landing it on Mars and during their Last High-Speed test, the system of the Helicopter got damaged due to some reasons and due to this, the system of the helicopter aborted. Due to this System Breakdown, there was a possibility that this flight will not be successful but NASA managed to get a Software Update from Earth and made this flight possible. The Ingenuity Team received the data through the Perseverance Mars Rover of NASA from the helicopter and confirmed the success of the flight at 6:46 a.m. EDT (03:46 pm IST). The maximum altitude of Ingenuity was 3 meters (10 feet). The helicopter first climbed up, then hovered for 30 seconds, and then slowly landed back on the Surface. NASA’s Ingenuity becomes the historical Helicopter by flying on another planet.

Ingenuity is the Technology Demonstration Robotic Helicopter. It is a completely Autonomous and Self-Charging Heavy Machine having two pairs of four feet wide routers blades that counter-rotate to lift off in the Martian Atmosphere. NASA Engineers made it lightweight to make it able to fly on Martian Atmosphere.

It is a great achievement for NASA Engineers. The Battery Life of this Ingenuity is just 30 days which means that it will stop performing after 30 days. NASA is deciding to study the evidence of life on MARS.