Around two billion users use WhatsApp that is bought by Facebook for 19 Billion US Dollars in February 2014. WhatsApp has become a very important part of our lives. We all know about WhatsApp. WhatsApp is an application where we send and receive end-to-end encrypted messages that can be text, voice messages, images, or videos, and make audio and video calls. In the mobile versions, we have an option of calling, but in the desktop app, we did not have this option. So, here is the good news for those who prefer to use a Laptop or PC over mobile Phones and use the WhatsApp Desktop app instead of the WhatsApp Mobile App.

Now, WhatsApp announced that we have the option to make end-to-end encrypted audio and video calls on our Desktop Application. But WhatsApp Desktop Application Calling Feature is only available on mac 0S 10.3 (or newer), and Windows 10 64-bit Version 1903 (and newer). This calling feature is not available on the Web version yet. The important thing is that we must have a connection between our laptop or PC and our Mobile Phone that has WhatsApp connected obviously with the internet. WhatsApp Desktop Application must have access to the computer’s microphone and webcam. Unfortunately, this feature is available for one-to-one calls but not for group audio or video calls. They will be expanding this feature and add group calls.

WhatsApp workers were trying to add a secure and reliable calling feature on the Web or Desktop version for two years or so. After too much wait, they finally add the option to make an audio or video Call that is end-to-end encrypted.

On 19th October 2020, they had already announced that they will soon update the WhatsApp Version 2.2037.6 and the update contains the secure and reliable end-to-end encryption audio and video calling feature on the WhatsApp Desktop Version. They said that the developments are in the beta stages. They also shared the screenshots of the button in the beta-version of that update. Audio or Video call options are in the header. 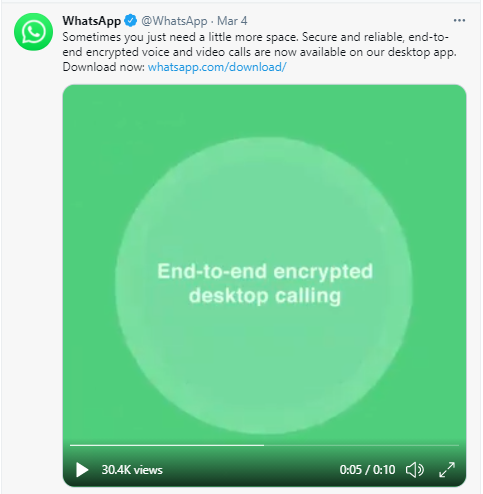